Teddy Huffam was the son of Pelenton Lemuel Huffman Sr and his wife, Mary Gilliam. In the early 1970s, he formed Teddy Huffam And The Gems in the Richmond, Virginia area. Huffam sang lead and played piano.

The group won the talent competition in 1973 at the annual Watermelon Park Singing in Berryville, Virginia. They were further accepted by Southern Gospel artists when they recorded “Gone,” written by Eldridge Fox. The song was so popular it remained in the Top 40 of the Singing News airplay chart for two years.

Huffam was still rather young when he passed away. He left the road in 1990 and passed away the following April at the age of 54. 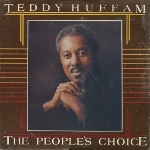 hi-res
1982 The People's Choice (Artist's Recording): Joy In Jesus; He's The Landlord; It's Real; Ninety And Nine; Jesus Is My Anchor; If It Hadn't Been; Walking By Faith; The Weight Of Sin; All For Me; His Name Says It All.